This is a lecture held by Magnus Nilsson at RanCon, a science fiction conference at Tre Backar, Stockholm September 6, 2003. In the audience were the conference’s guest of honor, author Robert Rankin.

Let me start this speech with an introduction to myself and my affiliation with the subject matter.

My name is Magnus Nilsson and I have run a music club in Stockholm for nearly eight years. The club is called Sunkit – which I guess is equal to a misspelling of the word crappy – and we are devoted mainly to the genre known as incredibly strange music.

But what kind of music is fit to be labelled with such a loose concept? What is referred to as incredibly strange can range from space age pop and exotica to camp or pure crap.

The origins of incredibly strange music can be found in the explosive market of the vinyl record, the LP, in the late 50’s. As always, the United States was a huge market for any new sensation and – for some reason – the album format boosted a never ending flood of records for any – absolutely any – situation in life. You could find titles such as Folk Songs for the 21st Century, The Singing Psychic, Music for Bachelors and a whole series of Music for Gracious Living. Politicians tried to reach the young by recording covers of Bob Dylan hits (good luck!). Every TV-host in America made at least one album and every celebrity of any kind presented some unlikely project, like boxing champion Muhammad Ali – who propagated for good dental hygiene.

Some of these records were big hits. But a majority of all these true experimental albums of the late 50’s and early 60’s ended up in surplus stores and flea markets. Eventually, they were re-discovered by youngsters in the 80’s – fed up with the charts, with ordinary music or simply just curious for something new, or old'¦ or rather – strange.

But hey, what’s so great about crap records anyway?

To start with, the best – or weirdest – records are not crap at all; they are like those amazing accidents that lead to new inventions. They turn your thoughts and imagination upside down. Incredibly strange music is by mere accident an art form with its own concept of quality and beauty.

I would like to stress that, even though I take this music lightly, this is not a laughing matter. I really dig the music, not all are good but everything is interesting and sometimes it tells you a whole lot about their time and about people’s dreams. This music is as much "bad" as it is "good", such as the movies of now famous Ed Wood Jr.

Anyway, Sweden never really got infected by the album craze. We’re not such a big market and we followed the United States much slower in those days. Even if you can find pretty heavy albums, you have to look in another direction to find samples of Swedish incredibly strange music.

We are millions who share the same dream, to perform on stage or on record with the music we like the most. I myself have spent some misfortunate years in rehearsal studios, small venues such as Tre Backar and an occasional visit to some recording studio. But looking back, it seems that most time was spent sitting in some bar dreaming about the Mayor Label Angel coming down from heaven picking us up to top the charts of the world.

This never happened. And yes, we are millions who share the same fate.

One solution is to do it yourself. And this has become a genre in itself, called vanity pressings. The concept is simple: if you’ve got no talent (or nobody understands your talent) and you can’t get a record deal, you can always pay for the recording yourself.

These recordings seldom got any major distribution, in the ordinary sense, but some reached the ears of collectors and got copied over and over again and thus got distributed anyway. Often without the knowledge of the originator. I am certain that the main audience for these tapes were jaded musicians, playing them in touring buses. Even some of the most mainstream bands have recorded covers of these infamous classics.

As early as the late 60’s studio musicians sometimes, on a dull day, arranged auditions with the most abominable artists just to add new items to their collection of oddities.

This first track I’m going to play actually resulted in an album, called The Entertainer, issued in 1977. Stig Hallén is believed to have been a fairly anonymous guitarist in some pop group or possibly a studio musician, but the need for new "talent" in the field of light popular music at the time made record companies try-out nearly anybody who had some looks and a stage experience to become the next big thing.

The studio engineer noticed Stig Halléns talent anyway. He let the tape roll during the entire session, capturing all mistakes, burps, incredibly bad excuses and funny lines – such as the legendary "raise my ears", meaning "turn up the volume in my headphones".

Stig has no problem with mixing singing and comments to the producer, quote:

There are details from the past
That nobody forgets
Raise the mic a little bit
A little, a little'¦
There are the things that you used to like

This recording made Stig Hallén a legend in his own time, even though his fame is as an underground icon. Hopefully, some day Stig himself will step out of the closet and receive his well-earned ovation.

Another cut from the classic tapes, spread from fan to fan since nobody remembers when, is Mona L Olsson.

Very little is known about her, but its no wild guess that some friend of hers persuaded her that "you’ve got such a great singing voice, Mona, you should send them record companies a tape and you’ll end up a star!" Even though her fate is sad – she died a couple of years ago, apparently schizophrenic – the outstanding qualities are apparent: her assault towards the tape recorder is hilarious, her total lack of musical understanding is amazing and – at the same time – she improvises with great gust yet some strange form of refinement. A Sergeant from Agadir, as we are about to hear, could have been an actual Swedish evergreen from the 40’s.

Mona tells the story of how she travels with friends to Agadir in Morocco, meets a native sergeant and immediately falls in love. This is a wonderful story, especially since it is halted by pauses where Mona hesitates – hum, what will happen next? Quote: We'¦ sssssspoke about writing a letter.

Another classic is Anna-Lisa Ingemanson, who not only issued her own albums but also performed live. She even made it to a legendary TV-show in the mid 70’s, a one-night stand with the most bizarre Swedish artists at the time. Take my word for it, they were really something.

Anna-Lisa was dressed in white lace, her face zinc white and in company with her white poodle (who was totally terrified). Anna-Lisa made her dance routine and constantly kicked the poor poodle.

She once performed – with her poodle, of course – at legendary soul club Zanzibar at Ritz in the mid 80’s. She turned up with a cassette recorder with her music, claiming that her piano teacher wasn’t allowed to stay up that late'¦ She sang out of key and her dog howled along for some 30 minutes, to a crowd anxious to dance to 70’s soul and disco music. The club host got death threats that evening.

Anna-Lisa ran a pedicure parlour here in Stockholm, and it is likely that she died this spring. This sample is a tribute to Stockholm, The Venice of the North.

The only Swedish incredibly strange artist who has made it in any way outside our borders is Eilert Pilarm, an oddjobber from Husum near Örnsköldsvik in the north of Sweden.

He has spent some years in mental hospitals, his illness making him believe that he actually was Elvis Presley. Nowadays, he is feeling fine – even though he’s still on medication – but he admits that he’s got two faces: one on the outside, and one inside the skull – the face of Elvis. "I can never get rid of that", he claims.

It takes a lot of courage to perform when you know your weaknesses, when you take the risk to be ridiculed. Eilert must do what he’s doing, no matter what.

Eilert can’t sing, he has very little understanding of music and sometimes you wonder if he knows English at all. But those are mere details; the reason why Eilert has been elected Britain’s most popular artist and has performed in front of adoring fans in Nashville is apparent: Eilert does not impersonate Elvis. Eilert does perhaps interpret Elvis. But the Eilert Pilarm brand is something else; he takes an Elvis song and creates something new.

It might be the case, that it’s not necessary for Eilert Pilarm to record any more than say five Elvis songs. It is the concept, the idea that makes him interesting. But I think that Eilert has taken his act a little bit further with his new album, Forever, where he dares to sing more powerful than before – even though his comp is pretty stiff (and has always been).

In the early 1990’s the Swedish Post Office Administration arranged the competition The Rock Championship. As everyone was invited to send in their demo tapes, they had to have someone sorting out entries that didn’t fit. This person was fortunately a friend of mine and he worked at a recording studio at the time. So he listened briefly to all entries, and saved a crisp copy of the ones that he knew would interest us at Sunkit.

It took us more than 10 years to figure out that the bizarre recording – referred by us as Maybe Jailhouse Rock – in fact was Eilert Pilarms first recordings. So everyone who thinks that the Eilert Pilarm that we now know is bizarre, should take a close look at his first attempts.

Now, you might think that this could be just about any distorted mind with a microphone and a guitar with stainless strings. Another sample from the same tape takes away any doubt: this really is Eilert Pilarm. I want to thank my colleague Burt von Bolton for filtering these tapes.

This is Kiss Me Quick from the same tape:

I thank you for your patience and welcome you to learn more about our strange universe. Our website is www.sunkit.com and we run the club every first Monday every month around the year at restaurant Bröderna Olssons. You’re most welcome! 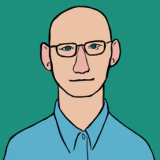